How does Crossbow work? What is the Crossbow Triggering Mechanism? What is a crossbow? Different types of crossbows? How does it work? Which Crossbow suits you?

These are some basic questions that can be asked by every hunting newbie. If you’re a hunting beginner, we are here to clear all of your doubts one by one.

But before getting an in-depth working mechanism of Crossbow, let’s look at a short history of Crossbow. 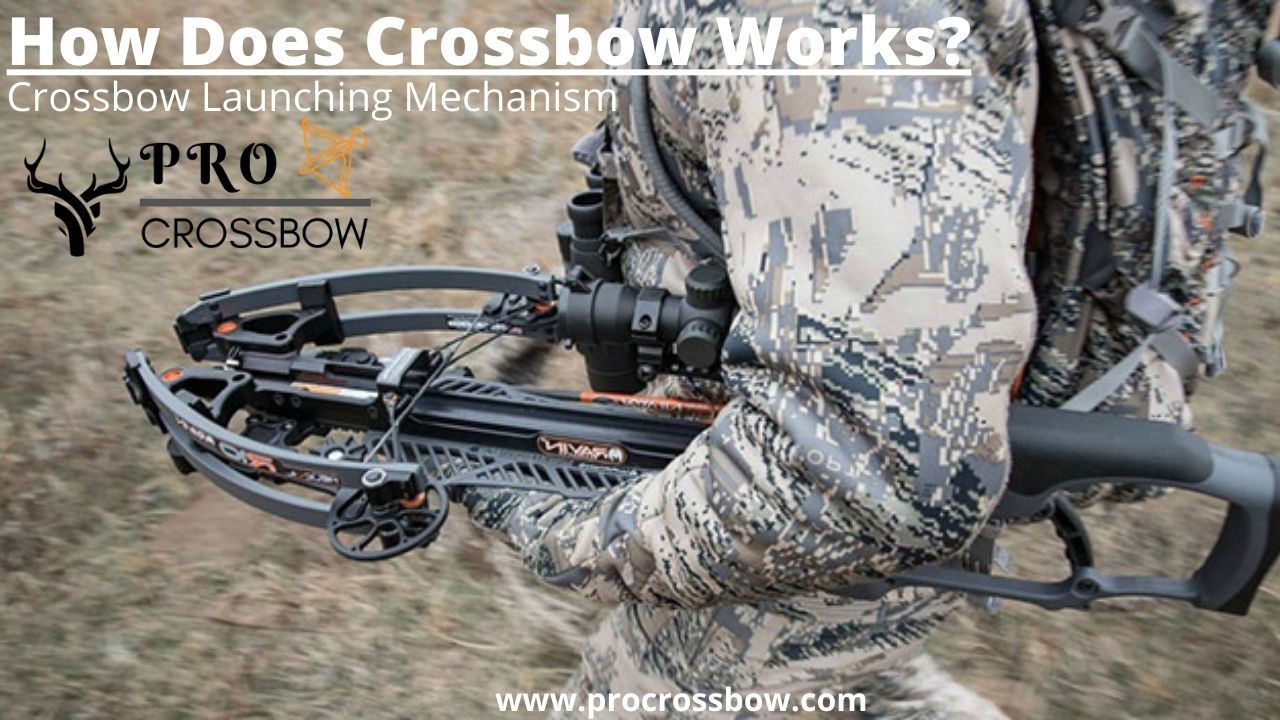 A crossbow is a modern form of classic Bow and arrow invented by the Chinese in the early times of the 5th century. After that time, it becomes a widespread war weapon.

The Chinese then transformed this Bow into repeating bows. Repeating bows was like a classical burp gun, which can carry bolts in an ammunition case. It has a single handle for cocking and shooting.

After this repeating Bow, Composite Crossbow was invented by Greece. To load this Crossbow, the hunter has to put force to pull back with his stomach on the far end of the weapon and Trigger it.

Innovation didn’t stop here, and composite Crossbow further modified to Oxybeles. Oxybeles is something like an oversized composite crossbow with a stand. Besides all these innovations, the Chinese Crossbow is one of the most successful inventions modified by different countries considering its features and suitable for hunters.

This Chinese Crossbow is further evolved into different countries, and after reaching Europe, It becomes one of the significant hunting tools and liked by professional hunters.

However, Crossbows have a modern form of old bows, which are relatively easy to learn and use. While Crossbow requires a proper skillset and strength to be an expert Archer, Hunting lovers can learn it with minimum effort and time.

Crossbows are still the most precise hunting bow among all versions of Bow and arrow, already used by many countries in those operations where precision and stealth is necessary. It is also used by special forces where one-shot damage will be required. Crossbows are mainly used for hunting and other target shooting sports. We have covered the Best Crossbows For Deer Hunting for you.

We all know how Crossbow was invented and why that simple Bow and arrow transformed into this traditional hunting crossbow.

What is a Crossbow?

A Crossbow is a ranged weapon used for hunting, which is similar to Bow. It’s just like a horizontal bow mounted on a long Stick to shoot bolts for hunting the target. However, the design of the Crossbow is somewhat complex and exciting, incorporating multiple features to enhance the efficiency of the weapon.

Recently we saw a drastic transformation in Crossbow design, construction, and its functionality. With an improved system, the modern Crossbow’s innovative features are entirely different from the simple Bow. The weapon used in wars and used by armed forces is no longer used in the same manner. Now Crossbows are evolved enough with complex designs are widely used in hunting purposes, and most of the professional hunters loved to use Crossbows for Deer hunting/Pig hunting.

Along with all differences between modern Crossbow and simple Bow, both have the same launch principle. The Crossbow is attached with a string system to fire a projectile. The Bow part of the Crossbow is commonly known as Prod, and it is oriented horizontally. The Prod part is attached to a vertical part known as stock or tiller. The stock is the part which the shooter holds while firing arrows or bolts from the Prod.

The Crossbow launching principle is similar to the Bow and Arrow; it targets moving or distant static hunt. However, the core difference between both is their structure design and triggering mechanism. A Bow and Arrow need to be pulled back and released from Bow for launching, while Crossbow has a proper triggering and arrow locking mechanism for firing the arrow, which requires less launching efforts. The Crossbow has a Stock for better stability.

How to shoot with a Crossbow?

Now, lock the string safely in the cocking device. Once the string is locked, safety will engage automatically. Now load a bolt into the Crossbow just above the foregrip. When you’re prepared to fire after aiming your target, remove your safety, and fire the bolt by triggering the device.

This safety implies the launching of a loaded bolt to a safe and close quarter target. Dry firing can damage the Crossbow because the strings of the Crossbow has a significant amount of energy while launching a bolt, so not having a bolt to launch can break the Crossbow’s limbs.

Crossbows are liked by most of the hunters due to easy to use feature and little experience and expertise required to gain the desired accuracy. Any Bow which looks like a horizontal bow can be considered as a crossbow.

A conventional bow and arrow release with low energy than the Crossbow, which will require the same effort in both cases. Apart from this released energy feature, crossbows are generally considered as high accuracy than a simple bow. This high accuracy is mainly caused by the fact that when an archer holds a conventional bow, It requires a lot of effort to keep it stretched while aiming a target. A perfect release requires time to focus on the target effectively. If the archer’s focus is divided into both efforts, “stretching a bow” and “aiming a target,” In this case, even a perfect shooter can lose focus on the target, as muscles are stressed and at the same time focusing on the target will be resulted in depreciated accuracy. While it doesn’t require stretching of a string with a focusing target because of its string locking mechanism, that’s why Crossbow can hit the mark with much more accuracy.

Now we will discuss some important parts of Crossbow.

The stirrup is a metal made frame placed at the front of the Crossbow. It is used to secure the Crossbow from slipping while cocking the Crossbow by placing the foot inside it.

A stock is a vertical body of the Bow. You can say it’s the backbone of the Crossbow, and all the other components of the Crossbow are mounted on it. The front part of the stock from where the archer holds the weapon is a foregrip, whereas the rear end that sits on your shoulder is called buttstock.

The limbs are like the wings of a crossbow. They provide the power to the Bow by flexing and storing the elastic energy to launch the bolt. Modern Recurve crossbows boast curved limbs, while Compound crossbows have a little complicated pulley and cam system.

The bowstring is basically a string that connects both the limbs and transfers the power to the bolt and it to launch the bolt.

The rail is the upper portion of the foregrip. Rail is the area where the arrow is mounted, and the bowstring moves over it.

Crossbows also have a trigger system, just like rifles, which are used to launch the latch that is holding the bowstring. The trigger assembly also has safety features to prevent accidents during launch.

Crossbows are a dangerous and extremely powerful weapon. Globally people are using it for hunting sports and target shooting. It’s a modernized version of a simple bow and arrow.

Once you know how various parts of your Crossbow operate and how to use it safely, and have some practice to launch it, then it’s a perfect way to have some fun when out for hunting. However, just like every other weapon, you should know and follow your state laws about the use of crossbow hunting before you use it.