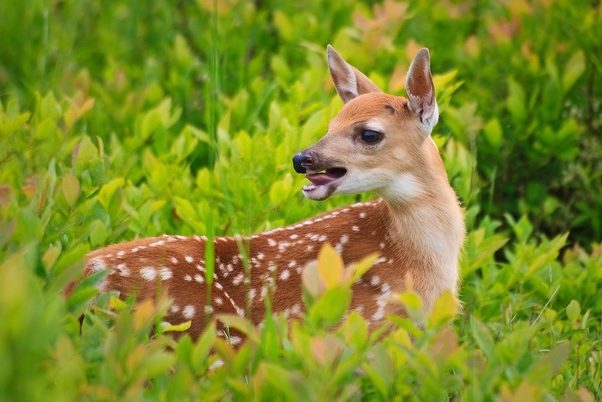 Hunting is not easy for someone who does not have any experience. Therefore, you will not have any idea what deer sounds mean unless you hunt yourself. You might think there are no such places around. A surprising number of deer live in the woods, and they are pretty vocal, using various noises to express a variety of emotions. That’s why we cover the information about “The Sounds Deer Make – What Do They Mean?”

The more you learn to distinguish the sounds deer make from your surroundings, the easier it will be to find them. Regardless of whether a deer makes a warning sound or just communicating, you will be able to find it. Every hunter should become familiar with these sounds.

The Sounds Deer Make – What Do They Mean?

When deer perceive or hear a disturbance but cannot smell the source, they may use low, repeated whines, foot-stomping and body bobbing to signal other deer to be careful.  Snorting is an explosive, intense blast of air that occurs when inhaling through the nose, loudly described as whew-whew-whew.

It’s possible to startle a predator by shaking its head and stomping its feet, so he moves away from him. There is no evidence that deer’s sense of smell requires conscious discrimination. Snorting deer generally take flight while flagging their tails when they smell danger.

Besides providing information about where the deer are, these sounds can also let you know what they are doing. In addition, different sounds can scare deer or even attract them. There are many fun activities on this list, even though they may seem complicated at first glance. Have a look!

For ages, deer have survived thanks to having a herd mentality, meaning they care for each other. Their way of doing this is through various methods, including warnings to one another when danger is afoot. In other words, it is necessary to learn the sounds as well. Once you learn these sounds, you will be able to recognize them when you listen to them.

The deer alert the rest of the herd when they hear these sounds, indicating you have been detected. You need to pay more attention. If your ears and eyes are open, you can hear other dangers, such as wolves.

When you hear sniffing sounds, you’ll soon find out where you are. Sniffing is not that different between deer and humans, though theirs is deeper and stronger. They can identify predators faster this way, and it is also helpful for you since it allows you to hear them.

The deer may also begin stomping when they become suspicious of nearby activity. There is a simple way of showing they are aware there may be a danger, but they have not yet determined what type of danger it is.

You’ll also warn your fellow members as well, which helps you discover them more quickly. Detecting this noise in deer is easy because deer are usually quiet by nature. Like dealing with woodblocks on the ground, the sound is similar to a thud.

They naturally pay attention to any incoming threats since their stomping draws attention to the imminent danger. In addition to snorting, deer are also capable of making other sounds when they are scared. A sound like this indicates that the crowd has become aware of the danger.

However, you tried to disguise your scent or hide your body, it was not enough to keep them off, so your chances of catching any of them now are pretty slim. In the forest, you can hear it because it sounds like a human sneeze. If you listen to it, then you know the deer are getting ready to run away. If they have already started running away, then they will soon raise their fluffy tails again. For a moment, the herd will leave you from this sound because it alerts them.

During a rut, boys become less suspicious of their surroundings, making it easier for them to meet new friends. In addition, you will notice that they make much louder sounds than deer usually do. As a means to intimidate possible mates, a buck will send out several sounds. In addition to these, a buck can make other sounds to attract the attention of females.

There is nothing wrong with short, deep sounds, but when the buck lets the does know to stay out of his territory, it means that this is his territory. An essential characteristic of buck grunts is their dominance.  When a buck decides to chase a particular animal, he makes these sounds. You’ll find them many times faster this way because they won’t be aware that there are predators around.

When they are at one of these moments, the antlers fall together. Furthermore, they produce a rattle-like sound. A fight may initially seem light, but it will become more intense after a while, especially if females are present. A great deal of noise will result.

You can probably distinguish rattling antlers based on this sound without much training, which is perhaps the most famous. It is clear evidence that the deer’s throat does not produce this sound. A deer makes antlers when it fights with two other deers using their antlers.

There is a good chance of finding a lot of money if you hear these sounds. A battle between two bucks will also draw the attention of the other males in the territory, including the dominant male. Their curiosity about his next challenge will keep them engaged.

Besides the sound of coughing and snorting, you should also know the sound of snorting. Compared to the previous sound, this is more aggressive, designed to intimidate the rivals. It is a snort and a wheeze that resembles a raspy snort. A male deer making this noise will show their dominant status when he is fighting with a female or fighting for territory.

A smaller or non-dominant male can easily be intimidated by the noise if he does not know how to show dominance. The more aggressive animals both make sounds before starting to fight before engaging in a fight. Males may be more likely to watch the fight in the area with this action.

Whenever deer feel uncomfortable or annoyed towards their surroundings, they snort.  This sound can often be heard when hunters bump and spook deer as they approach and leave their stands.

When the doe is ready to nurse her fawns, she softly grunts to keep in touch. Bucks will grunt for several reasons, such as to check the breeding status of does or to get a response from either a buck or a doe. Both bucks and does can make grunts, but their sounds, tones, and meanings differ.

Tending grunts are softer and less aggressive than contact grunts. You’ll want to know how to make each type of grunt for fall hunting and what they mean so you can use them effectively.

In case of lost fawns or if they want to find their mothers, they will bleat to get their attention. Bleats form a contact between moms and their fawns, informing them of what’s going on and when it’s time to nurse.

What noise does a deer make in distress?

Most bleats are higher in pitch when a deer feels distressed. During estrus, women often hear bleating sounds when their mothers are lost, fawns bleat for their mothers.

What does a deer grunt mean?

Why do deer make a blowing sound?

A deer will sneeze loudly and forcefully through its throat. Detecting danger from a distance, the deer blows. When a deer hears a noise, there is something fundamentally wrong. Sneezing helps deer breathe more easily and see better in the air.

We have explained the most important topic, “The Sound Deer Make- What Do They Mean? So that you can easily memorize the sounds of the dear and judge the level of danger during hunting. These sounds are available on the internet, so you can start remembering them. If you listen to the sounds of the woods next time you go hunting, you’ll know what you can expect.